The University of East Anglia has launched a new British Archive for Contemporary Writing (BACW). The following information is drawn from publicity promoting the launch. 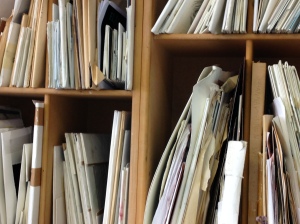 Why a British Archive for Contemporary Writing?

Some major British literary archives are currently located overseas, particularly at American universities (the Beinecke, at Yale, the Lilly Library, at Indiana University, Boston University), the most famous being the Harry Ransom Center in Austin, Texas (holdings include Julian Barnes, Elizabeth Bowen, Anthony Burgess, Anita Brookner, Jim Crace, Penelope Fitzgerald, John Fowles, Penelope Lively, Barry Unsworth). Indeed, concern with the extent to which such material has left the country led to the creation of the UK Literary Heritage Working Group in 2005. Within the UK, the British Library has a number of significant holdings (J.G. Ballard, James Berry, Wendy Cope, Ted Hughes, Mervyn Peake, Harold Pinter). A number of British higher education institutions hold collections representing some highly significant authors. However, as yet, there has been no archive entirely dedicated to a contemporary British collection focusing on practising contemporary writers.

What is meant by ‘The Storehouse’?

The archive is in two parts: The Collection part of the archive contains writers’ archives fully gifted to the University or on long term loan, with an emphasis on long term preservation, discovery and access. To further enhance the archive, UEA is also establishing a Storehouse initiative, an opportunity for authors to loan manuscripts and related literary material at a much earlier stage in their careers. The aim is to raise author profiles, to build up a truly contemporary archive, and for the wider research community to gain access to materials that would not otherwise be available until much later in an author’s career. The Storehouse will add value by organising and cataloguing the collections and making them more accessible even if authors need the flexibility to remove materials at a later stage. Several writers have already committed to depositing material under the model. It is expected to be dynamic, evolving as new writers come on stream while offering the writer the flexibility to remove materials at a later stage.

The Archive also provides an insight into the changing landscape of publishing throughout the twentieth century, through the papers of the oldest literary agency in the world, AP Watt, and the publisher Charles Pick including correspondence with Michael Holroyd, Nadine Gordimer, Anita Desai, Monica Dickens, Paul Gallico, Richard Gordon and Graham Greene.

Nature writing is a key theme within the BACW which already includes the archive of Roger Deakin, pioneer of the wild swimming movement and author of the acclaimed and highly popular, Waterlog: A Swimmer’s Journey through Britain.

Although the archive will look to build some of its collections from UEA’s own community of emerging writers it is also keen to attract material from other acclaimed authors produced in, or translated into, the English language.